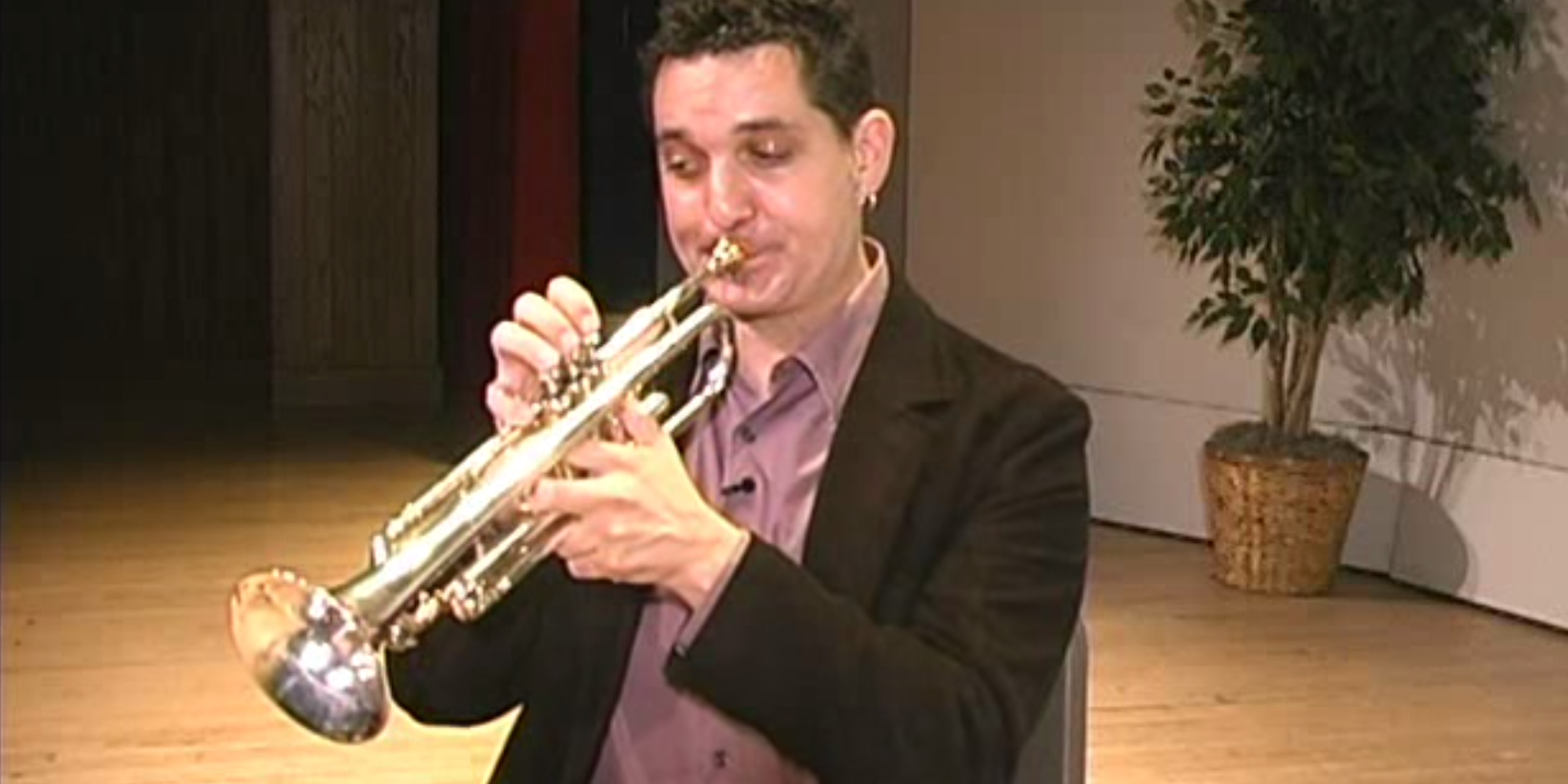 This is a brief instructional video for brass players with some suggestions for improving general trumpet flexibility. I love his concept of focusing on the sound you want and quality of execution you want and your body will figure out how to produce these results. He says to trust your ear and breathe vigorously, but naturally – an Arnold Jacobs vibe. And we love Arnold Jacobs. Check out Rex’s amazing trumpet flexibility!

Renowned international trumpeter Rex Richardson is a Yamaha Performing Artist and a veteran of the acclaimed chamber group Rhythm & Brass, the Brass Band of Battle Creek, and jazz legend Joe Henderson’s Quintet and Sextet. He teaches trumpet, jazz improvisation and chamber music at Virginia Commonwealth University and hold the title of International Tutor in Trumpet at the Royal Northern College of Music in England. He tours throughout the year as a clinician, recitalist, and soloist with orchestras, wind ensembles, big bands, and brass bands.

Hailed as “an artiste with an exceptional talent who has made a name for himself as one of the finest trumpet players in the world today,” (4barsrest.com) and “one of the world’s most engaging and astonishingly versatile trumpeters,” (Style Weekly) Yamaha Performing Artist Rex Richardson was named the 2008 Brass Herald Personality of the Year. A veteran of the acclaimed chamber ensemble Rhythm & Brass, jazz legend Joe Henderson’s Quintet and Sextet, William Russo’s Chicago Jazz Ensemble, and the Brass Band of Battle Creek, he stays busy as a headline artist at international brass and jazz festivals and as a soloist with orchestras, concert bands, brass bands, and jazz ensembles on five continents.

Richardson spent a musical childhood in various areas of the U.S., including Hawaii, Alaska, New York City, and Boston before settling outside Washington, D.C. Here, he studied with Dennis Edelbrock and Chris Gekker. While still a teenager, he was regularly engaged for some of the most challenging works in the repertoire. After high school, he continued his studies in Chicago with Vincent Cichowicz, becoming a fixture on the music scene through performances with the Civic Orchestra of Chicago and virtually all of the city’s top jazz musicians. Having joined Rhythm & Brass and signed with Yamaha in 1995, Richardson moved to New York City in 1997, where he immediately began touring with Joe Henderson and began pursuit of his solo career in earnest.

Having developed a unique reputation in the trumpet world for his combination of singular virtuosity, a highly personal style, and an emphasis on improvisation in classical as well as jazz idioms, Richardson has become a tireless champion of new music. He presented the premiere performances of concertos by Dana Wilson, Doug Richards, and Peter Meechan on four continents between 2006 and 2010. Since then, he presented the Australian, Brazilian, Swedish, English, Scottish, Thailand and U.S. premieres of James Stephenson’s Trumpet Concerto no. 2, “Rextreme.”

His five solo recordings, including the 2010 release Magnum Opus: 21st Century Trumpet Concertos, are all released on Summit Records.

Richardson has taught at Virginia Commonwealth University since 2002 and served as artist-in-residence or visiting professor at Ithaca College, London’s Trinity College of Music, and the Royal Northern College of Music.

In 2009, he was presented with the VCU School of the Arts highest honor, the Award of Excellence, and was awarded the 2011 Theresa Pollack Prize for Excellence in the Arts. The Pollack Prize selectors wrote: “Richardson stands at the vanguard of jazz, classical, and contemporary American music. As his star has risen internationally, he’s maintained a clear commitment to education through his position at VCU. He is an extraordinary musician.”