Louis Larouche is a fabulous trumpeter based in Quebec, Canada. He recently posted a video of him playing the Arban #6 characteristic study from the Arban’s Method. It’s a fantastic reference for you to listen to while you learn and study the piece. Check out more works by Louis Larouche on his SoundCloud page.

Louis Larouche received a First Prize in Trumpet from the Quebec Conservatory of Music. Prizewinner of a Canadian Arts Council grant, he completed a degree at Boston University with Roger Voisin. Louis has been featured on numerous recordings for CBC as a soloist and has toured in Canada, the U.S., Peru, and Chile. 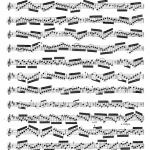 Specialized in the repertoire for trumpet and organ, he performs frequently in jazz and popular venues. He also teaches classical and jazz trumpet. A composer, he has written over 30 pieces in different styles such as jazz, Latin, and fusion.

Louis’ classical expertise does not prevent him from participating in jazz and popular musical Radio-Canada television broadcasts, often as guest soloist. He has accompanied artists of international reputation on stage and in recordings.